So i’m a bit of an addict when it comes to certain things. I’m addicted to the band Snuff, so I own almost everything by them and by bands involving the member/related to them. I’m addicted to shoes, and as such I own several pairs that I hardly ever wear. And the last thing is by films and television series.

I love British comedy and drama. Scour through my dvd collection and you’ll see some examples of great television that’s been out for the past few years. My latest addiction is to the series Life On Mars, and to a latter extent Ashes To Ashes. My mates bought me the 2 series box set of Life On Mars for my birthday, and it’s been watched ever since.

I decided to draw the four main characters of the series mainly through watching the series and wanting to draw some costume/people from different eras. Though they’re not the best drawings I admit, I quite like them as i’ve tried to make them bear at least a slight resemblance to the actors. 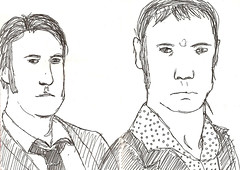 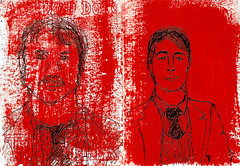